Data Clinic recover the data from a lot of liquid and water damaged phones – see https://www.dataclinic.co.uk/data-recovery-from-liquid-and-water-damaged-phones/. This is often a complex task, far beyond what a high street phone repair shop is capable of. Here’s an example enquiry from someone with a water damaged phone. 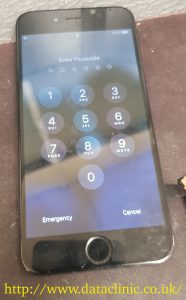 “I have a Huawei P30 phone with a cracked screen and water damage. I can tell the phone is still working because I can see the Bluetooth is on and there I vibrations. So it might just need a new screen. But the main thing is if replacing the screen doesn’t work then I want to be able to recover the data from it.”

Water damage to a phone will frequently cause the screen to stop working. A simple fix that many people think of using is to change the screen, but this does not usually work. The faulty screen is just a symptom of the problem (water damage) rather than the problem itself. So by changing the screen you’re not actually doing anything to fix the problem.

To recover the data from a phone that has come into contact with liquid it’s usually necessary to dismantle to phone and take it apart. This is because we need to get access to the motherboard, components and the NAND memory that holds the data. Sending in a water damaged phone for recovery means that you will not get back a working phone. The data will be successfully extracted to a memory stick with specific folders – eg. photos, contacts, videos etc, but the phone will be returned to you in pieces.

The cost of recovering the data from a liquid damged phone is roughly £300 – £400. Expect the pay an upfront fee too which pays for the technicians time to find, trace and rectify faults on the phone and obtain a file list which will be emailed to you for approval.